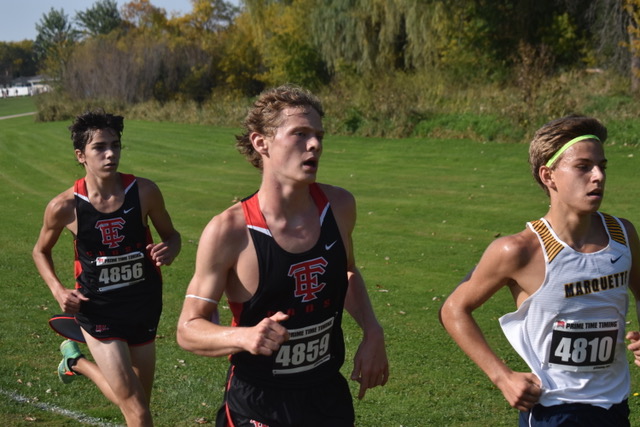 Tosa East hosted the 2020 Greater Metro Conference Varsity Championship Meet at Rotary Park and the Red Raiders placed 6th out of 9 teams with 131 points. The top 5 runners score for the team and after totaling up the placed Tosa East was tied with Brookfield Central. To break a tie you compare each team’s 6th runner. Brookfield Central had 48th place and Tosa East had 50th place so BC won the tie break.

Aidan Matthai and Arthur Wellenstein ran together at the front of the chase group until shortly after the 2 mile mark. Matthai placed 2nd after battling with Marquette’s Ben Deguire and beat him by a margin of 0.1 seconds with a PR time of 16:18.5 and is now tied at the 21st spot on the Tosa East All-Time Performers list with Chuck Alberts (1980), and Dan Woulfe (1976).

Wellenstein faded slightly and found himself in 6th place, trailing a pair of Brookfield East runners with 400 meters left to race. He found another gear and battled back to pass both runners to place 4th in a season best time of 16:23.6 which is also his second fastest time ever.

Both Matthai and Wellenstein placed in the top 8 which earned them 1st team All Conference Honors.

Ryan Morita placed 50th in 18:16 and was just 2 positions (7 seconds) away from the 6th Brookfield Central runner that determined the tie break.

The team result today does not show what the team is capable of accomplishing, however there were some incredible individual performances that should provide a spark going into the WIAA tournament series on the week of October 19th when we hope to be back at full strength. It is also notable that Wellenstein was the only runner for Tosa East that competed in the GMC varsity race today and in 2019 where he placed 9th.